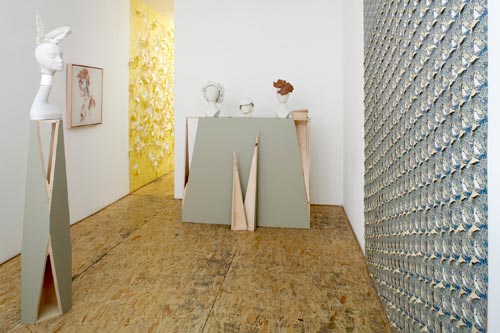 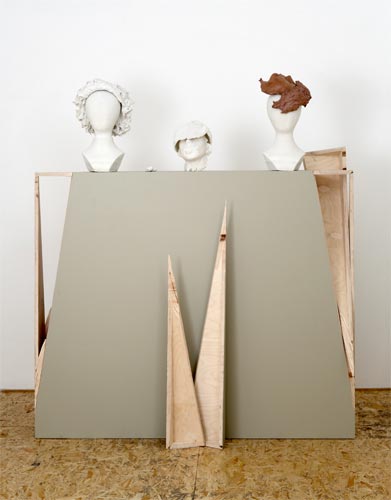 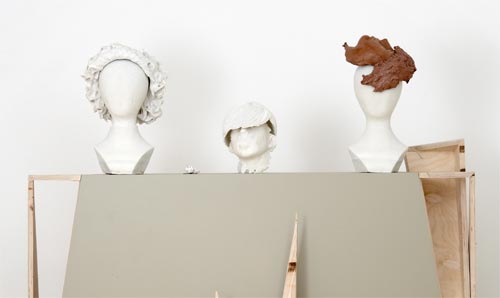 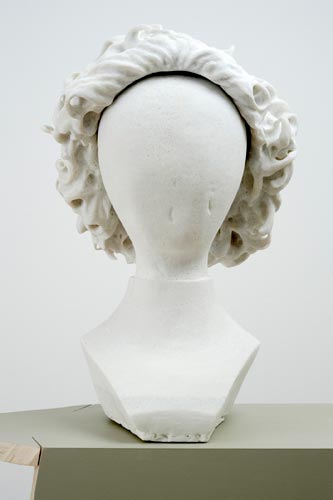 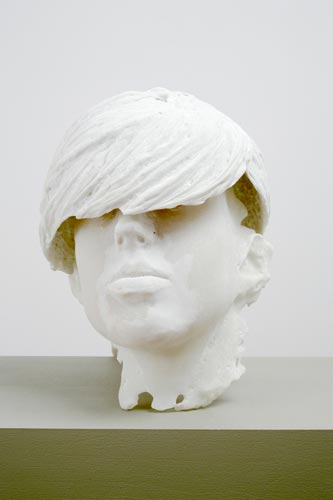 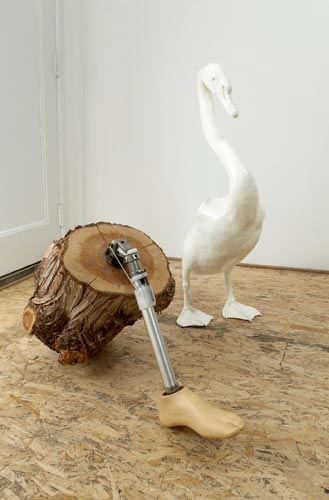 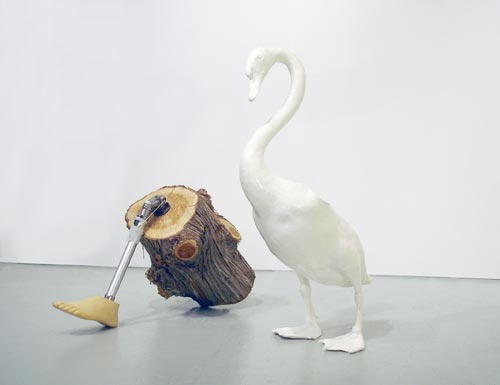 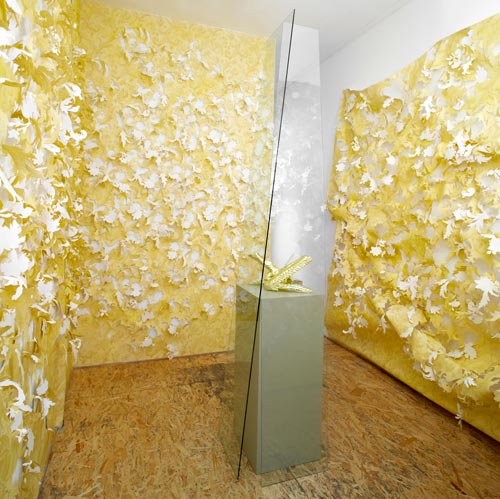 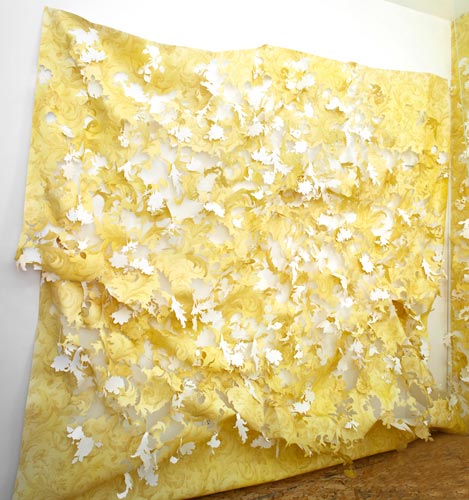 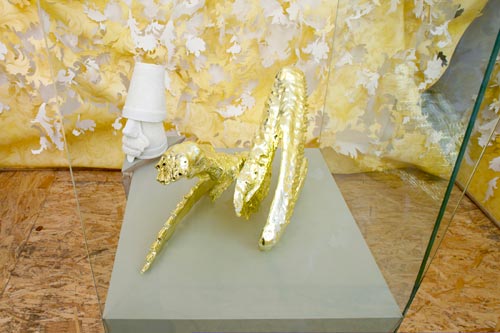 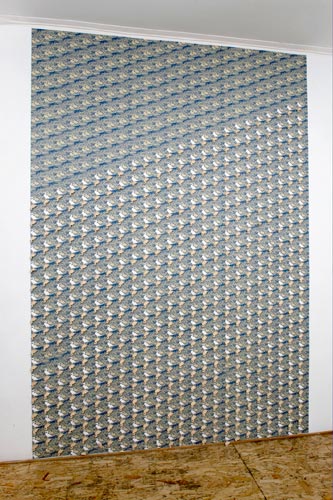 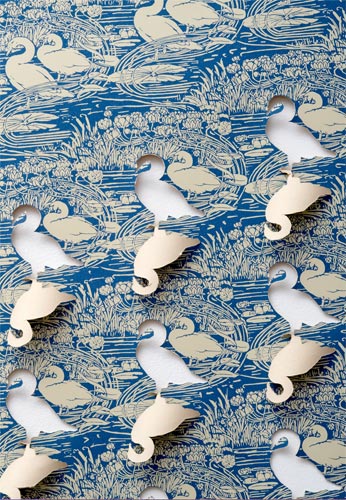 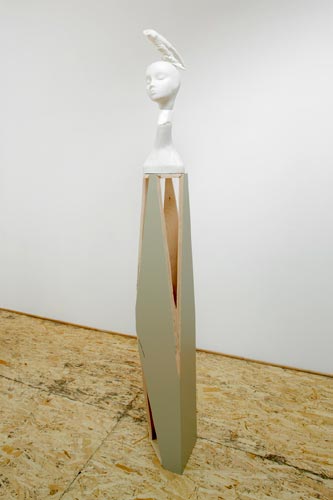 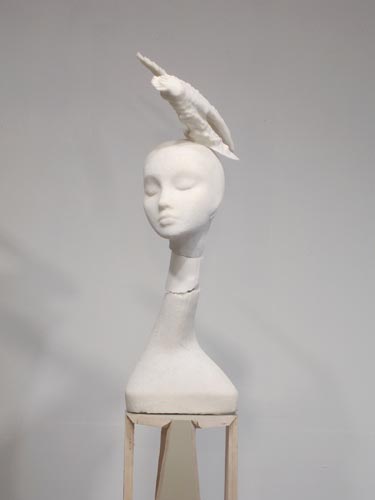 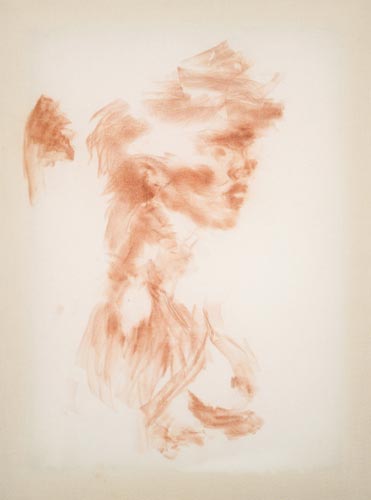 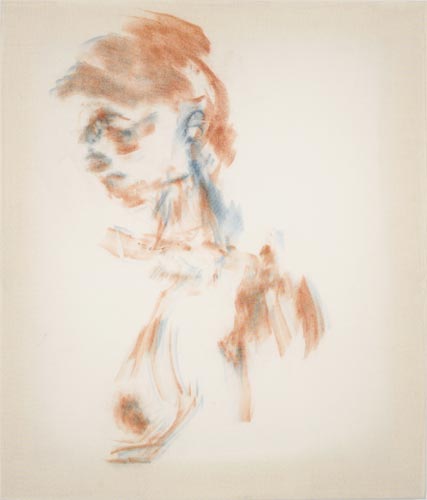 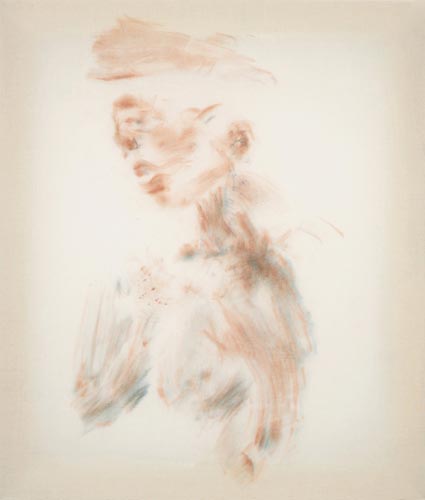 In architectural terms, “the mews” refers to stables tucked behind royal London homes, offering sanctuary for falcons during their formative stage of molting. Etymologically, the word “mews” comes from the French "muer," (‘to change’), but it is also a coincidental homonym of our word "muse," with its connotations of aesthetic creation. Benson's work draws on both of these meanings. As if caught in various stages of molting, the work exhibits the transition and transformation of both physical materials and aesthetic identity: marbleized resin simulates Styrofoam, a swan's wing simulates a hat, a prosthetic limb simulates a tree’s branch. Her playful optimism opens graceful passages for imagined evolutions.

In this way, Benson's work evokes change through an interrogation of the mechanics of representation. Relegating it to a game in an endless circle of mimicry, she violates conventional representation from every angle with strategies of a Surrealist nature. Even the pedestals are transformed, as slices expose their hollow interiors. Rather than an inert mode of display, these pedestals are now natural extensions of sculpture. The marbleized wig heads, also evoking inert means of presentation, become fitting subjects in their own right: blank faces fashioned to favor us all, but paradoxically bearing the likeness of no one. If the face is the strongest marker of identity, then Benson’s treatment of it as detachable, a mask or a toupee, upsets any fixed notion of resemblance.

Her self-portraits on linen are further evidence of this unreliability and slipperiness of appearance. Draping sheer muslin directly over her face, Benson proceeds to make one and two-toned conté crayon rubbings of herself that she then sheds and stretches on a frame. Despite their origins—a direct transfer from Benson’s own body—each performative drawing reveals a different identity. Benson thus loses herself in the process of rendering her own image. She is both present in and absent from the drawings, much like the cut-out swans floating belly-up in her altered Laura Ashley Dead Swan Wallpaper.

In contrast to this sense of loss, Benson's work also anticipates regeneration and proliferation. In the back room, her Yellow Room (Mother) hangs in full bloom with flowers intricately cut away from their background. The ensuing tangle pushes the repeat pattern to an extreme in its portrayal of nature. In something of a "strange seduction," she further intensifies this overwhelming effect by toning the wallpaper a pastel yellow to mix a sickly tinge in the sweet profusion.

In every phase, Benson finds or cuts her way toward the pleasure and humor in being and becoming something else. As a symbol of this persistent mutability of beauty, the wingless swan in Venus, I Love You stands regally beside a prosthetic limb. The Mews gathers her work together in a sanctuary to change.