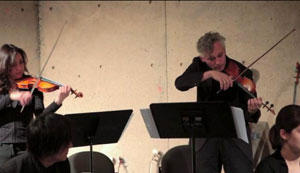 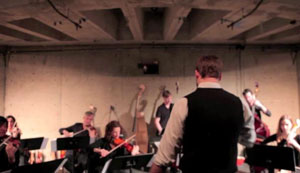 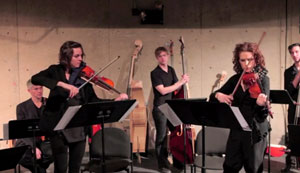 The Splits is a new collaborative music performance created by Jane Benson centered on acts of cutting and splicing, regeneration and proliferation. Benson literally slices into conventional musical instruments and music making to produce this new concert performance and subsequent installation. Using precision handsaws Benson has cleaved cheap, mass-produced string instruments from China: two violins, a viola, cello and double bass. The two halves are then played together by pairs of musicians to explore a range of unexpected tones described by her collaborator New York composer Matt Schickele as “alien folk music”.

The premiere of The Splits involved duets, quartets, octets and dectets performaing an original score by Schickele. Written specifically for these unique instruments, Schickele’s composition intertwines rural and metropolitan traditions into a surprisingly accessible wash of strings. Sometimes enraged, sometimes contemplative, Benson’s latest project embraces the impulses and repercussions of fracture with elegance and humor.

The Splits is a sponsored project of Artspire, a Program of New York Foundation for the Arts, and Fractured Atlas, a non-profit arts service organization. The Splits is made possible by Lower Manhattan Cultural Council’s Swing Space program through a real estate donation from Capstone Equities. Special thanks to Tenzin Phuntsog.

The Splits extends Jane Benson’s ongoing interest in transformation into the realm of collaboration and performance. The work begins with the bisecting of various string instruments into two halves, cutting them along their length, creating two separate instruments. The two halves must then be played together to complete a tune and are, thus, for duets (or quartets, octets or dectets) only—pieces which she is creating in collaboration with musicians and composers. The act of splitting at once destroys the integrity of the instrument as an object, and disrupts the conventional process of aesthetic creation that the instrument traditionally permits. Splitting is not merely an act of destruction, however. Instead, it opens graceful passages for imagined evolution: the split instrument becomes a newly creative instrument, permitting the creation not only of new music, but new communities (visual artist, the composer, the musicians, and the audience).

Benson has “split” two violins, a viola, cello and double bass: all, cheap, mass-produced string instruments made in China. This choice was made after various discussions with musicians revealed that such objects were not considered to be “real” instruments at all. Cutting into such a “fake” violin, Benson realized, would not only spare the destruction of a beautiful, handcrafted instrument, but would also position the work more firmly within her ongoing conceptual framework, which explores the ambiguous and mutually constitutive intersections between the real and artificial.

In addition to splitting the string instruments she is also making a series of Split Scores (sheet music deconstructed specifically for The Splits). Because each half of the split instruments has only two strings, and therefore plays a limited range of high notes or low notes, the scores for the performances will be deconstructed for each player. For example, the musician playing the half of the instrument with the high strings plays from sheet music with the low notes cut away and vice-versa.

Centered on acts of cutting and splicing, regeneration and proliferation The Splits gathers artists, performers and audiences together to create a series of multimedia events dedicated to the concept of change.