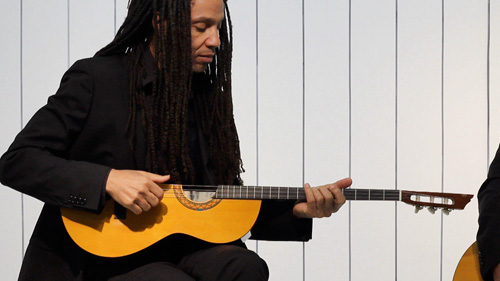 Crossroad Blues, 2013 and She's Lost Control, 2013 are two of a series of short video works that explore the split guitar duet. The 3-5 minute videos, featuring Rolling Stone Magazine's top 10 guitar songs, capture the shifting relationship between two musicians as they play together and explore the symbiotic demands of performing a familiar piece of music on an unfamiliar instrument. The change of pitch and unique timbre created by the "split" instruments results in works that are at once complete and incomplete.