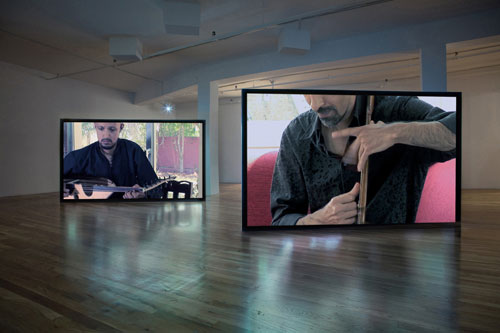 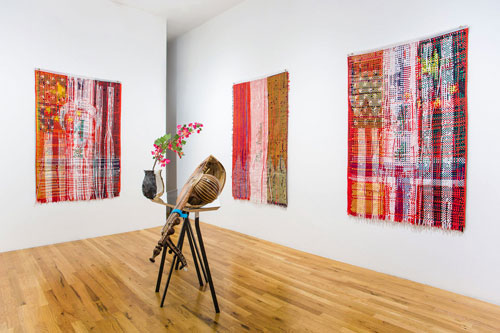 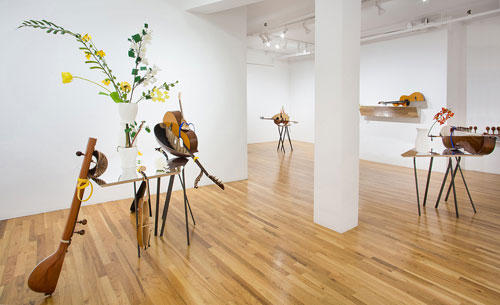 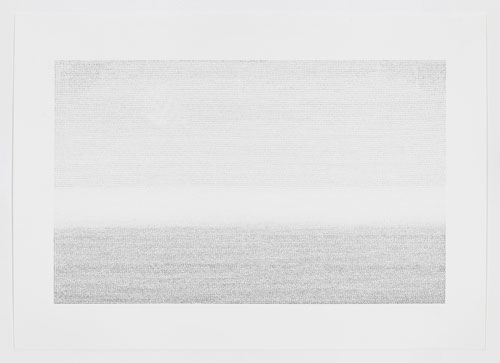 Play Land, features new works that explore contemporary geo-cultural disruptions through division and rupture. The exhibition centers on Finding Baghdad (Part A), a dual-channel video installation broadcasting an intimate, virtual duet between two Iraqi brothers who fled Baghdad in the early 2000s.
Finding Baghdad (Part A) begins with the splitting of two mass-produced Iraqi instruments, an oud and a djoze. Radically altering their long-honed aesthetic conventions, this gesture requires a pair of musicians to play both half-instruments in order to activate a full tonal range. Once meticulously re-engineered, these fragments are sent to each of the brothers whose duet bridges the living rooms of their far-flung new homes in Cologne, Germany and Sanad, Bahrain. Using Skype as a platform for extraterritorial exchange, Finding Baghdad (Part A) investigates how traditional objects and digital technologies can create resonant new forms of transnational communication in a century already defined by global upheaval and evolving patterns of diaspora.

Play Land also engages sculpture, drawing and weaving to expand upon the themes of division and connection explored in the dual-channel video. The sculptural series A Place for Infinite Tuning re-contextualizes Benson’s performable fragments atop mirrored platforms whose slender, angled legs evoke a sense of perpetual ambulation. In her lalala landscapes, a spectral suite of drawings render a single musical note in long graphite rows, creating shifting horizons as the viewer reads the somber melody. Family Portrait, the final body of work included in Play Land, references the brothers’ dispersed family, as well as future iterations of Benson’s split performances. These woven compositions of primary color integrate strands of shredded flags, obscuring and revealing emblems from all of the countries in which the brother’s immediate family now live: Iraq, Bahrain, Germany, Norway, United Arab Emirates, United States, Turkey and China.

We are currently witnessing the greatest forced migration of people since World War Two. Iraq has been spilling out people since long before the invasion of 2003. If you pay just a little attention to the news, you might believe that Syria is pouring its citizens out in a human tide surging toward Mama Merkel. Meanwhile, runaway teenagers from Europe strike off in the other direction. Are they also refugees, escaping to ISIS from cultures they hate and that hate them too?

Of course, it’s not true. Just like most young Muslims in England and France view ISIS as no kind of escape, so does the vast majority of Syrian and Iraqi refugees still reside in those states as “internally displaced” persons. Most of their brothers and sisters also stay close by, in Lebanon, Jordan, and Turkey. The walls of “Fortress Europe” may be shaky but the only civilizations at risk are the ones being shot, shelled, and bombed into destruction by an ever-increasing cast of belligerents.

Jane Benson’s Play Land addresses this reality in her characteristically precise but moving way. No media hyperbole here. No bland simplifications, either. If it’s true that Play Land demonstrates a rare kind of intelligence and care, it’s truer still to say that it speaks in an aesthetic idiom in which political thought is never distinct from familial feeling.

To borrow one of Benson’s musical metaphors, her art restores the full tonal range to the experience of exile and separation. Finding Baghdad shows us two brothers, Bassem Hawar and Saad Mahmood Jawad, playing together over Skype after long separation. Although Benson’s cameras linger on them, she doesn’t pry; we can only tell how the brothers feel about their reunion by listening to their music and by watching their beautifully mobile and adept faces and hands. The experience seems to me exquisite: painful and pleasurable in equal measure. Their playing creates a profound feeling of ambivalence – like being a refugee in one’s own country – that is realized with great allegorical power in her delicately destroyed and reconstructed instruments that the brothers must learn how to play, apart and together.

When Benson says that her artexplores technologies of extraterritorial exchange, she doesn’t mean that we live in a world in which people float free of circumstance or citizenship. The dreams of post-nationalism are as illusory as the idea of the post-racial—Benson’s Family Portrait wall-pieces tell us all we need to know about that. In Finding Baghdad, two brothers are separated by war and immigration regimes. They meet somewhere in the free space of the Internet, but they are tied to their states of exile. The magic of their performance—and the visionary promise of Jane Benson’s artwork—lies in the way Bassem and Saad bring to life music that makes something entirely new, but never completely unified, out of a world that has been rent asunder.