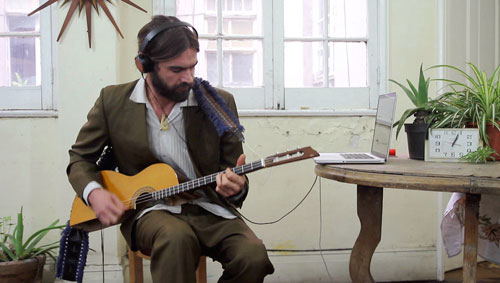 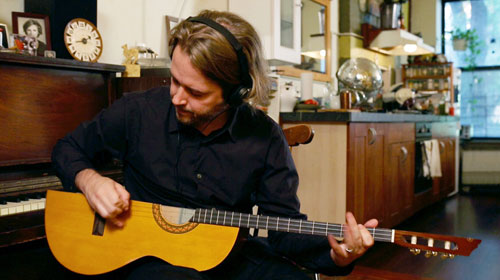 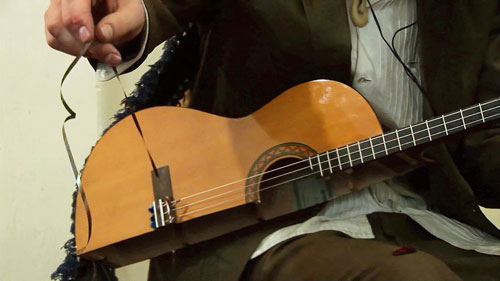 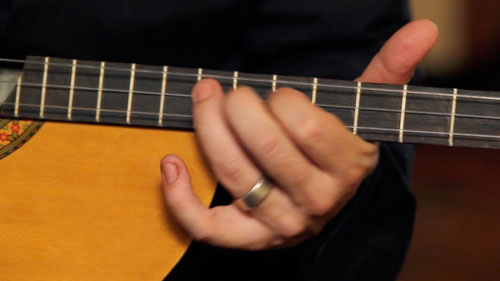 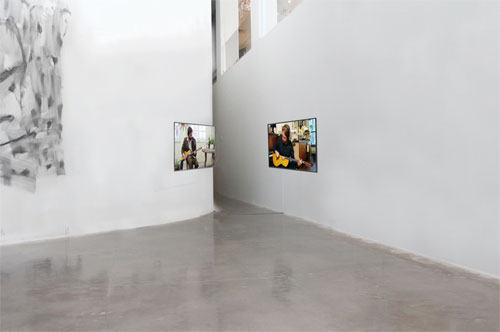 Installation view of Extended Play: TeWhenuaCentroChapineroCorona at the Queens Museum 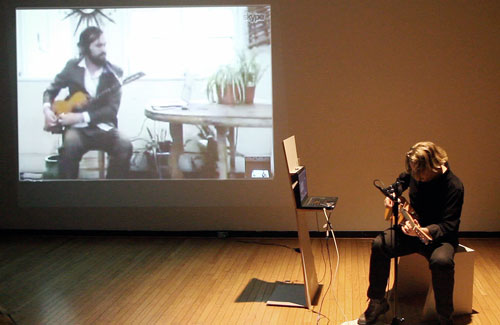 Still from a live performance of Extended Play: TeWhenuaCentroChapineroCorona
on January 19th 2014.

Extended Play: TeWhenuaCentroChapineroCorona is a dual channel video work featuring a split guitar duet performed via live AV feed between New York City and Mexico City. The work explores the different musical and social aspects of division and connection using technologies of splitting and linking to imagine new forms of transcultural communication between two disparate parts of the world.

The split guitar duet of Extended Play: TeWhenuaCentroChapineroCorona is the first international geographically "split" duet. Thus, extending the split duet to an exploration of cultural and social distance and connections, aswell as, the disruption and regeneration of traditional aesthetic processes. Each of the musicians perform on half a classical guitar synchronizing a scored and improvised musical dialogue in which diverse traditions interact with, develop and expand alongside one another; where in spite of the distance between them, the two halves of the guitar resonate with the same music.

The performance takes place in the living rooms of the two musicians providing an extraterratorial space, and stage, for this transcultural sound exchange. Sebastian Cruz, originally from Chapinero, Bogotá, performs from his living room in Corona, New York City and Misha Marks (who grew up in TeWhenua, New Zealand and once lived in Corona) performs the complimentary half of the duet from his home in Centro Historico, Mexico City. Combining the people and sounds of multiple cultures the work proceeds by exploring and extending the kinds of dialogue that division enables; the split guitar creates new arrangements, sounds, ways to perform and to connect. In this way, the act of physical splitting and the technology of virtual linking permits a live conversation in strings, mimicking the spontaneity and character of communications more commonly held over Skype.

Extending the work of the split instruments to encompass physical distance and cultural landscapes, Extended Play: TeWhenuaCentroChapineroCorona suggests there may be different ways to evolve, new ways to find or build unity.

The Splits is a sponsored project of Artspire, a Program of New York Foundation for the Arts,
and Fractured Atlas, a non-profit arts service organization
Scroll To Top